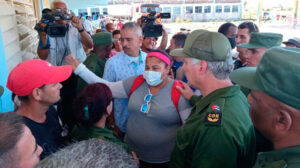 Arriving there, the Cuban leader talked personally with EPICOL workers, an important fishing company seriously ravaged by Hurricane Ian, and also with locals.

Díaz-Canel conveyed to inhabitants his confidence and willingness to rebuild damages caused by Ian, and to support over 30 families who lost everything and remain sheltered at an evacuation center.

Previously, the Cuban president toured El Vial urban organic agriculture in Pinar del Río where he talked with workers and students in charge of recovery works.

Díaz-Canel visited for the third time in six days this territory, the most hit by Ian’s ravages on the western part of Cuba, to check the recovery works and talk with inhabitants.

Announcing his visit on Twitter Sunday morning, the Cuban president said the “situation is really tough, damages are considerable, over 200 families have lost everything. But Pinar del Río residents are not alone, #TodosJuntos saldremos de esta (We all together come out well)”.