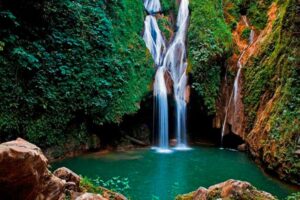 Sancti Spíritus, Cuba.- Four of the six popular camping facilities, an attractive nature tourism offered by this province in central Cuba, are ready to receive visitors.

At the moment, capacities are being sold for the Cantú, La Hormiga, Manacal and Poza Azul Plants, in all cases endorsed by Health and other entities linked to the activity, after the territory passes to the new normality.

Those interested in going to these centers, of the Islazul Hotel Group, can book for the rest of the year and thus enjoy options such as hiking, tours of the history route, visits to caves, horseback riding and cultural offers.

Cantú Plant, for example, exhibits exuberant vegetation, a river with crystal clear waters and mountainous elevations that allow direct contact with the environment and with sites linked to history.

The Provincial Company of Popular Camping reported that Bamburanao, in the northern municipality of Yaguajay, is still depending on the end of the Covid-19 vacciation campaign and at the end of this task it will be subjected to maintenance and sanitation work, in Arroyo Lajas, in Cabaiguán areas. The emergence of this type of tourism on the Caribbean island is based on an idea of ??the historical leader of the Cuban Revolution Fidel Castro (1926-2016) based on the possibility of natural and historical tourism, as a way of healthy and educational recreation.

Denominated nature or ecological, it reached its four decades of creation on May 16 last and has contributed during all these years to the recreation of the Cuban family and also of foreign vacationers, with increasing quality in their proposals.