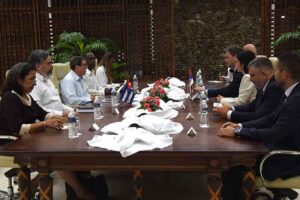 During the meeting, Rodriguez highlighted the excellent development of bilateral ties and the prospect of continuing making progress in diplomatic relations between the two nations, which are celebrating their 120th anniversary this year.

Rodriguez spoke about the possibility of visiting Serbia when possible and Selakovi? said that he would be welcomed with the same hospitality.

The Serbian foreign minister pointed out that Belgrade and Havana have maintained a close friendship, even in very difficult times.

Selakovi? highlighted the possibility of collaborating in areas of common interest, and emphasized the two countries’ support during the Covid-19 pandemic.

Selakovi?, who earlier honored Cuban National Hero Jose Marti, began an official visit to Havana on Wednesday and will conclude it on Friday.