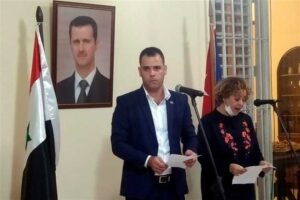 Havana city, Cuba.- Syrian Chargé d’Affaires in Cuba Ali Abass congratulated the Syrian community in Havana on the occasion of the 76th anniversary of the proclamation of their country’s independence.

The event, held at the Syrian Embassy in Havana, served to recall the departure of the last soldier from the French colonial army on April 17, 1946, to realize the dream of self-determination.

“This victory means a lot of pride for us, thanks to great sacrifices, and the lives of heroes who gave the most precious thing they had to their homeland, their honorable blood, for the sake of Glory and the impregnability of every remote place of our beloved land,” Abass stressed.

The diplomat recalled that his country has been involved in a war against terrorism for 11 years, which he described as fierce and unjust, aimed at destroying the Syrian State and, he said, “undermining the unity and dignity of our people.”

“The steadfastness of our people and their effort to live with dignity confirm today the figment of independence, and clear the dark cloud that sought to return Syria to the hated era of colonialism,” Abass emphasized.