Russian Duma calls to end US blockade against Cuba

Russian Duma calls to end US blockade against Cuba 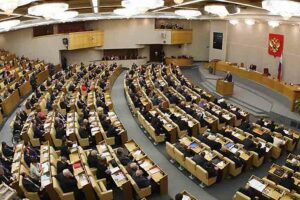 Moscow, Russia.- The State Duma (Lower House) of Russia on Tuesday makes a special call to the parliamentarians from foreign countries about the necessity to put an end to the economic, commercial and financial blockade of the United States against Cuba.

Sergei Mironov, leader of the Fair Russia faction in the State Duma, recalled that

187 UN member states supported a resolution in 2019 condemning the US policy towards Cuba, and Washington ‘did not care at all.’

Mironov pointed out that the State Duma is once again appealing to the legislators of all countries and the UN with a claim to insist on ending the financial and economic blockade against Cuba.

According to the draft declaration, submitted to the Lower House on June 8, Russian parliamentarians advocated for the resumption of a constructive and mutual respect dialogue between Washington and Havana.

They also demanded the immediate and unconditional cessation of any form of pressure for sanctions and called for a rapid normalization of relations between the two neighboring States.

On June 2, the Council of the Russian Federation (Senate) approved a statement to energetically condemn the United States blockade against the Caribbean nation and made a call for international solidarity in favor of Cuba.

The Russian Senate drew attention to the fact that 28 resolutions of the United Nations General Assembly about the necessity to put an end to the blockade of the United States against Cuba were adopted by the overwhelming majority of UN State members.

Etiquetas: Russian Duma calls to end US blockade against Cuba