March against US blockade on Cuba advances towards Rome

March against US blockade on Cuba advances towards Rome 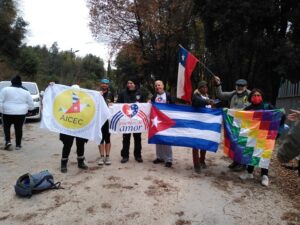 Poggio Buscone, Italy.- The march along the road of Saint Francis of Assisi in demand of the lifting of the US blockade on Cuba departed today from said location on its third and penultimate stage of the walk towards Rome.

This day’s walk covers 38 kilometers starting in the Poggio San Lorenzo community, with an intermediate stop at the city of Rieti to recover energy.

The coordinator of the Bridges of Love Project, Carlos Lazo, is ahead of the march along with the President of the Association for the Cultural and Economic Exchange with Italy, Michele Curto, and the Coordinator of Associations of Cubans Residing in Italy, Ada Galano. The group covered over 100 kilometers during the second day, starting in the city of Assisi, on the framework of the Road of Love initiative, promoted also by a number of solidarity and religious organizations.

The stated goal of the event is to create conscience on the need to eliminate unconditionally the punitive measures imposed unilaterally by the United States on Cuba for over six decades, and promote peace in the Americas and the rest of the world.

Etiquetas: March against US blockade on Cuba advances towards Rome