End to blockade and aggressions against Cuba demanded in Belgium

End to blockade and aggressions against Cuba demanded in Belgium 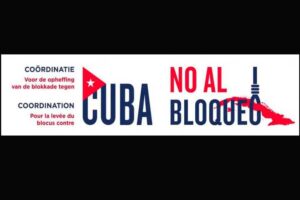 Brussels, Belgium.- The Day for Cuba campaign convened in Belgian cities from May 18 to 21 started in Brussels on Wednesday with the demand in front of the European Parliament to end the US blockade and the aggressions against the island.

The Luxembourg Square, which overlooks the European Parliament, is the headquarters of the mobilization, supported by Cuban residents in several European countries, Latin Americans, Belgian solidarity associations and political forces, MEPs and representatives of other sectors of society.

The Belgian Coordinating Committee against the Blockade against Cuba and the Cubanismo.be association, two organizations very active in denouncing and condemning the economic, commercial and financial siege imposed by Washington on the Caribbean nation for more than 60 years, attend the meeting.

Associations of Cuban residents in Germany, France and the Netherlands issued statements in support for the day, while the Europe for Cuba channel announced that it broadcasts details of the activities on social media.

The mobilization takes place just two days after the announcement by the US government of the elimination of some of the restrictions imposed by the administration of former President Donald Trump to tighten the blockade and the economic suffocation on the island.

Etiquetas: End to blockade and aggressions against Cuba demanded in Belgium