Cuban residents in South Africa to condemn US blockade

Cuban residents in South Africa to condemn US blockade 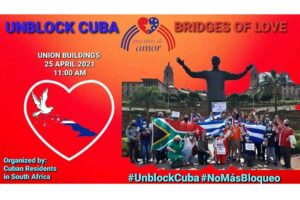 Pretoria, South Africa.- Hundreds of Cubans who reside in South Africa will express their condemnation of the US economic, commercial and financial blockade against their homeland in a caravan in the city of Pretoria on Sunday, April 25.

Members of the Association of Cuban Residents in South Africa (ACRSA) will meet here to make public their claim as part of a World Caravan against the Blockade which is being carried out in many parts of the world, Cristina Florez Madan, president of that group, told Prensa Latina.

We all know and have suffered the effects of this genocidal and illegal blockade first-hand, the members of ACRSA said, but we also know that our heroic Cuban people is the one that is suffering the most.

Therefore, from the south of Africa, we will demand the immediate end of the criminal and inhumane blockade to which Cuba has been subjected since 1962 by successive US administrations.

By keeping the blockade in effect, according to Florez, Washington is affecting us Cubans when we make commercial and financial transactions and when we send aid to our families in Cuba.

She adds that we call on the US to comply with international law regarding non-interference in a sovereign country.

The least thing we can do is joining this cause with all citizens of the world who are calling for the end of that criminal measure against Cuba. The blockade must not continue, she said.

Etiquetas: Cuban residents in South Africa to condemn US blockade