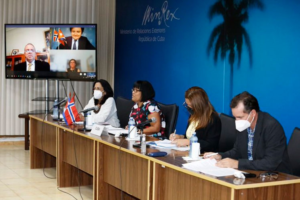 Havana, Cuba.- Representatives of Cuba and Norway reaffirmed their interest in boosting their bilateral relations in a virtual exchange between deputy foreign ministers.

Cuban Deputy Foreign Minister Anayansi Rodriguez and the Secretary of State of the Ministry of Foreign Affairs of the European nation, Jens Frolich Holte, acknowledged in official conversations the importance of fostering their political and economic ties.

According to a press release from the Cuban Foreign Ministry, both representatives highlighted the positive links established in the cultural sphere and the cooperation projects for mutual benefit and for the benefit of other states.

The diplomats highlighted the fluid and beneficial cooperation in the multilateral sphere, as well as the coincidence in multiple aspects of the international arena.

The Cuban representative thanked Norway for its support to the Cuban resolution against the blockade imposed by the United States.