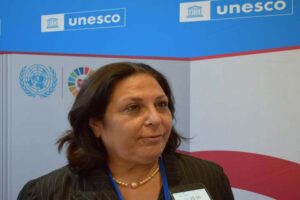 Paris, France.- The First Deputy Minister of Education of Cuba, Cira Piñeiro, said that the Cuban education system maintains its development, despite the impact of the blockade imposed by the United States.

“We have many limitations as a result of the intensified blockade (…), which affects the education sector like everyone else, but in the face of it, the political will of our country and the efforts of its workers are imposed,” she declared to Prensa Latina in the framework of a UNESCO forum, itself a prelude to the event dedicated to the topic to be raised by the UN General Assembly in September.

Piñeiro highlighted the fact that the Cuban State dedicates almost 24 percent of the annual budget to education.

“Other strengths are innovation, dedication and commitment, as well as the permanent improvement of our educators,” Piñero went on to add.

Regarding the meeting taking place between June 28th to 30th, the first deputy minister commented that she will expose the reality that Cuba is facing, as a result of a complex international context due to the Covid-19 pandemic, conflicts and the economic crisis.

According to Piñeiro, Cuba accepted UNESCO’s proposal to hold a national consultation on thematic axes such as inclusion and quality, teacher training and the use of information and communication technologies.

It also covers issues related to financing, “in which we have difficulties due to the US blockade, a policy that impacts all areas,” she said.