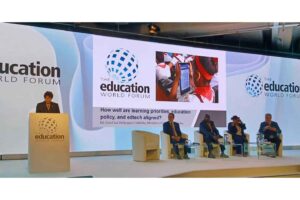 London, Great Britain.- Cuba presented its experiences and achievements in education at the World Education Forum, taking place in the UK, and called on the participants to join forces to face the current cultural, technological and political changes.

“Cuban education is in a process of critical reflection on its scope and achievements,” Cuban Minister of Education Ena Elsa Velazquez, said during the plenary session of the event, and admitted that the results of the last 10 years do not always correspond to the efforts being made as a result of the scarcity of resources caused by the US blockade imposed on Cuba.

She pointed out that despite the difficulties, the Cuban government dedicates 25 percent of the expenses of the State budget to education, and that all children, adolescents and young people have access to it in a free and equitable way. “It is a priority for the State and is endorsed in the Constitution of the Republic,” Velazquez remarked.

Velazquez stated that, in order to raise the quality of learning and its concretion in school curricula, Cuba favors greater participation and social control of student and youth organizations, families and the community.

The minister added that in the current context, the importance of acquiring new learning is increasing, including environmental problems, the struggle for peace, citizen responsibility and preparation for family life, among others.

She also mentioned Cuba’s experience in dealing with the Covid-19 pandemic, which forced schools to close and transfer a significant weight of school learning to the independent work of the student and the role of the teacher shared with the family.