Winners of Conservation and Restoration Prize in Cuba revealed

Winners of Conservation and Restoration Prize in Cuba revealed 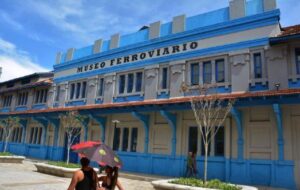 Havana city, Cuba.- The Casa del Vedado (House of Vedado), located in that Havana neighborhood, and the Railway Theme Park Museum in Camagüey receive in Cuba the 2022 National Prize for the Conservation and Restoration of Monuments, respectively.

The National Council of Cultural Heritage revealed the names of the winners, after several works representing the provinces were analyzed, 11 of which corresponded to the Conservation section and nine to the Restoration section.

The so-called Casa del Vedado, rescued by late Havana Historian Eusebio Leal, stood out for the care it preserves after a maintenance process in 2020 to protect its eclectic style.

The building, which reopened to the public during the celebrations for the 501st anniversary of the founding of the village of San Cristobal de La Habana, interprets the domestic environment of a middle-class family of the early 20th century in that Havana neighborhood.

In the case of the Camagüey museum, the judges highlighted its “relevance, effectiveness and coherence as an integral dynamizing project” and the design, constructive, spatial and environmental solutions.

They praised the premise belonging to the Office of the Historian of the City of Camaguey, which revalues the industrial railroad heritage in a unique work of its kind in Cuba.

The Prize for the Conservation and Restoration of Monuments stimulates those who are in charge of protecting and rescuing monumental works and Cuba’s built, historical and natural heritage.u

Etiquetas: Winners of Conservation and Restoration Prize in Cuba revealed