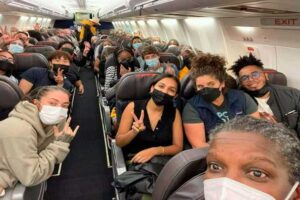 Havana, Cuba.- Members of the US interfaith organization Pastors for Peace arrived in Cuba to express US people´s solidarity with Cuba ahead of internal subversion attempts and threats orchestrated from Washington.

Upon the arrival at the José Martí International Airport, Gail Walker, director of the caravan, claimed activists from 20 US states joined the 31st edition of these solidarity caravans to convey US people´s the majority emotions towards Cuba.

She pointed out the US activists have a special interest in learning about Cuba´s achievements in fighting the Covid-19 pandemic and also about virtues of a people who have been fighting off amid the tightening of the economic, commercial and financial blockade, and aggressions from the United States.

With cellphones´ flashlights on as a symbolic expression of their vision of Cuba and as a shining example of the emancipatory aspirations of the peoples, several caravan members called the United States for a just relationship with Cuba and the immediate end of its hostile blockade.

The caravan, which brought a food and medicine donation, was received by Caridad Diego, head of the Office of Religious Affairs of the Communist Party of Cuba, Fernando González, president of the Cuban Institute of Friendship with the Peoples (ICAP), and Reverend Izett Samá, member of the Martin Luther King Jr. Center.