Covid-19 with Severe Impact on Economy

Minister of Foreign Trade and Foreign Investment  Rodrigo Malmierca, highlighted Cuba will not give up its right to economic and social development, and that we must work with optimism, but at the same time be realistic and be prepared for complex situations. 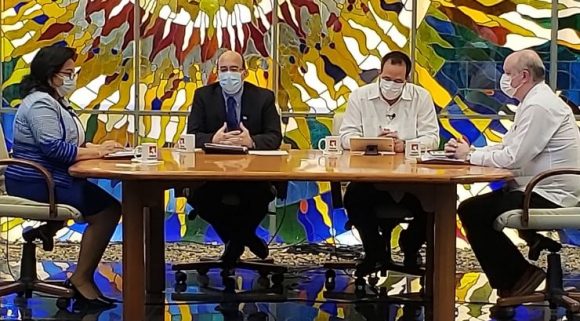 The economic and health situation with Covid-19 were the subjects of the Roundtable.

HAVANA, Cuba.- Minister of Foreign Trade and Foreign Investment  Rodrigo Malmierca, highlighted Cuba will not give up its right to economic and social development, and that we must work with optimism, but at the same time be realistic and be prepared for complex situations.

Malmierca emphasized at the Roundtable TV program on the importance of exports, as it is the safest source of financial resources, while underlining the need to replace imports, mainly food and energy carriers.

The Minister remarked foreign direct investment and the urgency of boosting food production, adding that amid the difficult situation Cuba shows its pharmaceutical industry and medical services as strengths, opening up the possibility for new exports.

Cuba is setting an example in international cooperation, the Minister of Foreign Trade and Foreign Investment said and thanked the help from Venezuela, China and Vietnam.

“We live a complex moment, because Covid-19 is joined by the upsurge of the blockade, but in Cuba we will work with effort and dedication to ensure that our economy faces obstacles the best possible way and advances into development,” Rodrigo Malmierca, Foreign Trade and Foreign Investment Minister said.

The official emphasized in the Roundtable that, although Cuba has a different situation from the world, because the people are the center of government attention, of course it will be impacts.

Malmierca mentioned exports and tourism among the most damaged lines, as well as food imports, whose prices show a higher rise.

The Minister added it is embarrassing how the U.S. government is trying to undermine reality, and they suggest they export food to Cuba, which is true, but they do not talk about the onerous conditions they do it.

Public Health Minister Jose Angel Portal reported this Monday at the Roundtable TV program on the international epidemiological situation associated with the spread of Covid-19.

Dr. Portal stated that an inclusive, equitable and universal response is required at the global level to defeat the pandemic, as human health is a quintessential public good that must be prioritized.

Portal reiterated that most of the population is susceptible to the disease, so the violation of social isolation has been the cause of the critical health landscape in many countries around the world, such as the United States, the nation with the most confirmed cases today.

The Minister of Public Health further indicated that the best experiences at the international level, such as the agile and drastic measures implemented in China to defeat Covid-19, should be imitated.

Dr. Portal pointed out that Cuba remains in the phase of limited indigenous transmission, because the transmission events of COVID-19 are limited to small conglomerates in different territories.

Speaking at the Roundtable TV program, he stated that according to the forecast models indicating the development of the disease, the country tends to a favorable situation.

“This is not to say that we are not free to reach a critical scenario,” Dr. Portal said, and emphasized, “moving away from the epidemic stage depends on the cases we can isolate and diagnose, and on the effectiveness and fulfillment of social isolation.”

The Minister of Public Health called for the elimination of negative examples still remaining among the population, and to go to health services for any symptoms to receive appropriate treatment.

Public Health Minister Jose Angel Portal said that Cuba, 47 days after the first case of Covid-19 was detected, maintains a low level of serious patients compared to countries in the rest of the world.

The official explained that 82 per cent of the deceased were people over 60, so he called for intensifying the attention of the elder, and reaffirmed that there had not been a single deceased case of Covid-19 in Cuba that had not been reported.

The Minister reiterated that 63 percent of those diagnosed with the disease are asymptomatic, and most of those affected are in municipalities such as Santa Clara, Centro Habana, La Habana del Este, Plaza de la Revolucion and Matanzas.

Dr. Portal reported that there are 39 local transmission events in the country and that the active research process analyzes about four million people every day.

Health Services Are Guaranteed in Cuba

The Minister of Public Health, Jose Angel Portal, stated that the services offered by the sector to deal with COVID-19 are guaranteed, and it is planned to create a greater number of hospital beds.

There are more than 400 intensive care beds and only 12 per cent of them are occupied, he reported and reiterated that health services to the population remain, including hemodialysis and cancer services.

The Minister conveyed a message to medical students, and explained that the subject of the end of the school year and the quality in the continuity of their training is followed up.

In addition, Dr. Portal recognized the health staff who struggle every day to save lives, the students that research, collaborators and all the people who from their creativity support the distribution of means of health protection.

Deputy Minister of Public Health for Collaboration, International Relations and Information, Marcia Cobas, reported that Cuba’s medical brigades in 61 countries – those already serving and the Henry Reeve Brigade- are working on the basis of containing the spread of Covid-19.

The official said noted at the Roundtable TV program that the island had received 51 requests from governments to support the confrontation of the new coronavirus, and to date 24 brigades have been sent to 22 countries.

Dr. Marcia Cobas highlighted that Cuban medical cooperation is based on the conceptions of the United Nations, and is highly valued in the world.

The official also remarked the admiration felt by the people whenever a brigade departs for another nation to save lives, in a true example of solidarity.