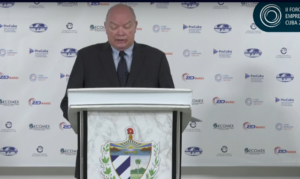 Havana, Cuba.- Over 2,200 representatives of companies, governments and trade institutions from 86 countries are taking part at the Cuba 2021 Second Business Forum, inaugurated today in this capital by Minister of Foreign Trade and Investment, Rodrigo Malmierca.

The official highlighted in the opening address on-line Cuban policies devoted to foster trade, investment and renewable energy sources have been welcomed.

Representatives from governments, 20 Chambers of Commerce and 41 trade and investment promotion agencies from different parts of the world are among those attending the event, convened to replace the traditional Havana International Fair.

For the first time, an on-line fair is being carried out in which around 600 companies from 46 countries requested to display stands.

In total, 1,262 businessmen from Cuba and the world take part in this edition, including more than 200 local forms of non-state management.

Malmierca ratified the will to move forward in the strengthening of ties between Cubans living in other countries and the nation, and they will have a panel to exchange business opportunities.

The minister addressed the international economic situation, marked by the Covid-19 pandemic and the unequal distribution of vaccines, which increases insecurity not only from a health perspective but also from a commercial point of view.