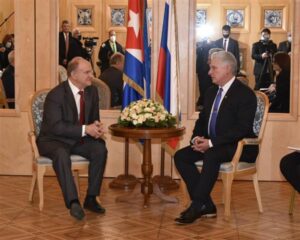 In the context of the working agenda of his official visit to this nation, President Diaz-Canel thanked the Russian Communists for their support to the Caribbean island in the fight against the economic, commercial, and financial blockade imposed by the United States.

The Cuban head of State also conveyed to Andreyevich a fraternal greeting from Army General Raúl Castro, in which he acknowledged the support of the Russian party organization to the Cuban people.

He took the opportunity to invite the Russian communist leader to the event on world equilibrium based on the conception of Cuban National Hero José Martí and the historic leader of the Revolution, Fidel Castro, to begin in Havana in January 2023.

Andreyevich,on behalf of his followers,expressed his joy to receive and exchange ideas with the Cuban party leader.

We have visited many countries in the Latin American region where we have excellent working relations, but the Russian Communist Party has an identification and commitment with Cuba, he said.

Díaz-Canel has been visiting Russia since November 19 to 22 on a tour that began in Algeria and will also take him to Türkiye and China in response to invitations made by the leaders of these countries headed to strengthen bilateral ties.