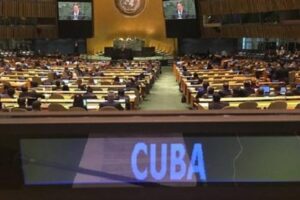 United Nations, United Nations.- Although Joe Biden´s administration ordered a review of the impact of the unilateral restrictive measures in the fight against the pandemic, the US government still mantains without any modification the sanctions against Cuba.

Thus indicate a press release issued by the Cuban mission to the United Nations, which explains how Cuba was excluded from Whashington´s review exercise.

The statement exposes that, unlike other countries, no change of the current measures regarding the island was announced, thus ignoring the damages caused by the blockade, particularly reinforced under the effects of the health crisis.

“The US blockade along with the multidimensional crisis caused by Covid-19, led the Cuban State to face enormous obstacles to obtain the basic resources essential to guarantee the functioning of the national health system”, the statement points out. Only in reagents, medical equipment, means of protection, expendable material and medicines, Cuba invested in 2020 some 102 million dollars not foreseen in the plan of the economy, the statement adds.

Along with the multiple restrictions of the US blockade, the island faces the intimidating effect of the persecution against its financial transactions abroad, the mission denounces, which generates significant additional expenses, multiple shortages and shortages in the national health system.

Faced with this situation, the Cuban mission to the United Nations points out, Cuba has to acquire numerous supplies through third parties, which generates significant increases in unit prices and freight costs.

Etiquetas: Cuban mission to the UN warns of the weight of US sanctions