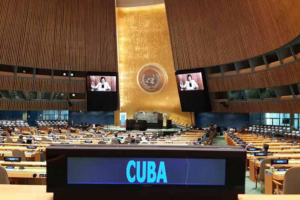 Havana, Cuba.- Cuba remains committed to complying with the goals of the United Nations 2030 Agenda for Sustainable Development, despite the blockade imposed and intensified today by the United States amid the pandemic.

The Minister of Science, Technology, and the Environment, Elba Rosa Pérez, ratified this at the High-Level Dialogue on Desertification, Land Degradation and Drought, held in New York, United States.

During the meeting, the official denounced that Washington’s economic, commercial and financial siege is the main obstacle in the access to technologies and laboratory reagents for the analysis and characterization of soils and the strengthening of national and institutional capacities.

Despite this, she said, the Caribbean nation experienced progress in meeting the objectives of the 2030 Agenda regarding climate change.

In addition, she highlighted the implementation of the State Plan known as Tarea Vida (Life Task), to confront this environmental challenge, which includes actions to minimize its impacts on the natural resource Soil.

The minister referred to the National Plan for Food Security and Nutritional Education, implementing a program against drought, and the recently approved National Program for the Advancement of Women (PAM).

The latter, she said, favors increased participation of women in agricultural activities, governance, and sustainable land use and constitutes a reference for the adoption of actions to reduce gender gaps in all areas.

Pérez stressed the need to implement urgent actions to face the challenge of sustainable and resilient economic recovery, especially the productive system and the fight against poverty and inequality.

Etiquetas: Cuba ratifies its willingness to comply with the UN 2030 Agenda on Climate Change