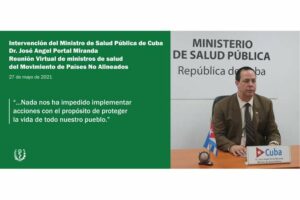 Havana, Cuba.- Cuba ratified its commitment to multilateralism and international cooperation to guarantee an effective response against the SARS-CoV-2 coronavirus.

In more than a year of fight against the disease, Cuba has sent 57 brigades from the Henry Reeve International Contingent of Physicians Specialized in Situations of Disasters and Serious Epidemics to 40 countries, Public Health Minister Jose Angel Portal said.

The brigades joined more than 28,000 medical professionals who were providing services in 66 countries, Portal stated when speaking at the Virtual Meeting of Ministers of Health of the Non-Aligned Movement in the framework of the 74th World Health Assembly.

‘I can also tell you proudly about the development of five vaccine candidates of our own,’ Portal added.

Based on the results from two of them, Soberana 02 and Abdala, both in phase III of clinical trials, a health intervention began in recent days to vaccinate risk groups and territories, and is progressing favorably.

Over one million people have received at least one dose of one of these vaccine candidates so far, and we plan that 70 percent of the population may be immunized by the end of August, he explained.

Portal asserted that after the studies are completed, Cuba will be in a position to vaccinate its entire population and also help other countries to do so.