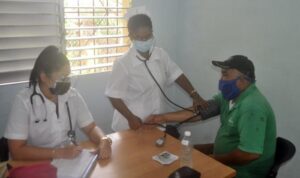 Sancti Spíritus, Cuba.- The 38th anniversary of the Family Doctor and Nurse Program in Cuba, an idea conceived by the historical leader of the Revolution Fidel Castro, was celebrated today in this central territory.

In Manaca Ranzola, in the municipality of Fomento, the provincial ceremony was held to recognize family doctors and nurses with relevant work in this program, considered essential for the development of Public Health on the Island.

This was the headquarters of the Argentine-Cuban guerrilla Ernesto Che Guevara and the Las Villas Front in the final offensive against the Fulgencio Batista regime and the camp of Generalissimo Máximo Gómez during the Ten Years’ War (1868-1878).

In addition, Che provided his medical services to the inhabitants of this rural area, nestled between mountains.

Dr. Iliany Sarduy, spoke of the commitment of professionals in the sector and increasing work in the offices of the Family Doctor, as well as the importance of the doctor-nurse binomial to achieve greater results to the satisfaction of the population.

In statements to the press, Dr. Juan Armando Castillo, a second-degree specialist in Gynecology, explained that from this program the doctor became a community leader, given the more complete health care people began to receive.

In his conclusion speech, Manuel Rivero, Director of Health, weighed the achievements of the province and the municipality in different indicators, as well as in the most remote places of the Cuban geography, through the promotion of this program.

He highlighted the role of family medicine in confronting Covid-19 and the high levels of vaccination against Covid-19, at the same time that the province obtained the second best infant mortality rate for every thousand live births in the country.

The economic, commercial and financial blockade of the United States against Cuba continues, but it can and will be ended.

The commemorative activity was presided over by Deivy Pérez, member of the Central Committee and first secretary of the Communist Party in Sancti Spíritus, and Teresita Romero, Governor of the territory, along with other authorities.