Diaz-Canel: The cadres of the Revolution are, first and foremost, political cadres.

Diaz-Canel: The cadres of the Revolution are, first and foremost, political cadres. 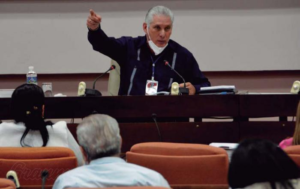 Havana, Cuba.- Cuban President Miguel Díaz-Canel Bermúdez said Saturday that the first thing that must distinguish a cadre of the Revolution is his deep ideological, revolutionary, ethical, and professional preparation. The cadres, under the conditions of our Revolution, are political cadres, he said.

Speaking at Commission No. 3 of the 8th Congress of the Communist Party of Cuba, dedicated to the analysis of the Cadres Policy, he considered that the chiefs could not only approach problems from an economic perspective.

“Above all, an ideological, political, and social approach must take precedence, and I would say more, an environmental approach because here we are talking about sustainable development.”

In his analysis before the delegates, the member of the Political Bureau of the Communist Party of Cuba warned that cadres must have the capacity to lead without waiting for indications. Cadres have to think; they have to analyze contexts and propose alternatives when facing complex problems, said Díaz-Canel.

Those who are waiting to be told what to do are neither leaders nor cadres. They are mere task performers. He is not contributing, he added; he is not leading.

Etiquetas: Diaz-Canel: The cadres of the Revolution are - first and foremost - political cadres.