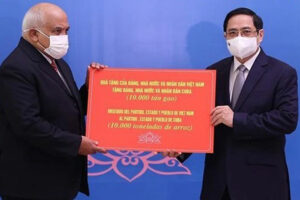 Hanoi, Vietnam.- Vietnam on Thursday donated 12,000 tons of rice to Cuba to help it face the food difficulties derived from the United States blockade and the Covid-19 pandemic.

Following a symbolic delivery of the cargo, Prime Minister Pham Minh Chinh explained that 10,000 tons were donated by the Communist Party (CPV), the State and people of Vietnam.

The Committee of the CPV in Hanoi donated the remaining 2,000 tons to Havana.

After expressing gratitude for such gestures, the island’s Ambassador to this country, Orlando Hernandez Guillen, quoted First Secretary of the Communist Party and Cuba’s President Miguel Diaz-Canel, who described them as a vivid expression of Vietnam’s invariable solidarity and a source of encouragement for the Revolution and the Cuban people.

That solidarity is especially expressed in these moments when the island faces the United States blockade, tightened during the pandemic, and the forces determined to destroy the Revolution using deception and distortion on social media, the diplomat said.

Upon receiving the rice donation this Thursday, Ambassador Hernandez Guillen said, ‘today, we are once again receiving the solidarity, sister, firm hand from Vietnam, geographically distant, but close in our feelings and hearts.’