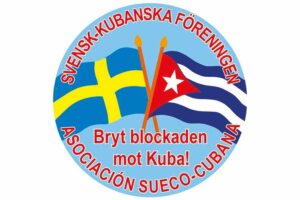 Havana, Cuba.- Several Swedish cities will host activities on Saturday, June 12, to reject the US blockade against Cuba, as part of a world day condemning that policy, Zoltan Tiroler, president of the Swedish-Cuban Solidarity Association, announced on Wednesday.

Speaking to Prensa Latina, he stated that a letter was circulated to the association’s affiliates in the Scandinavian country, calling for actions to demand the end of the economic, commercial and financial siege imposed against Cuba.

According to Tiroler, in addition to addressing Washington’s aggressiveness, the day will allow to publicize the campaign to support the purchase of syringes for Covid-19 vaccination in Cuba, the association’s current priority.

The Europe for Cuba channel convened to carry out actions on social media from June 6 to 11 and to take the streets on June 12 and 13 in the five continents to repudiate the blockade and demand its immediate and unconditional lifting.

The call to demonstrate in a new world day against the blockade Cuba has been suffering for more than 60 years is framed this time in the vote at UN General Assembly on June 23 of a new draft resolution on the necessity to end that policy.

A similar text has been approved in the main United Nations forum 28 times since 1992.