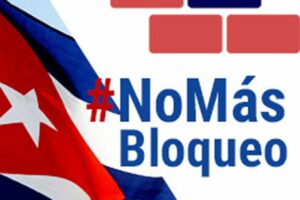 Havana, Cuba.- Representatives of 18 European organizations, solidarity associations and unions reaffirmed today the demand for the end of the blockade that the United States has imposed on Cuba for six decades.

According to the Ministry of Foreign Affairs of this Caribbean nation, these activists participated in the International Virtual Solidarity Meeting, held as part of the celebrations for International Workers’ Day.

At the event, convened by the Central de Trabajadores de Cuba and the Cuban Institute of Friendship with the Peoples, were Angelika Becker, president of the Solidarity Network with Cuba in Germany, and Jonas Pohle, from the Junge Welt newspaper.

According to the source, the Germanic activists offered details of their solidarity work and commented on the UnBlockCuba campaign, coordinated by that newspaper, in which organizations from 27 European countries participate to demand the lifting of the US blockade.

On the opening day of this contact on social networks, held on Friday, the general secretary of the World Federation of Trade Unions, George Mavrikos, also highlighted the leading role of Cuba in defense of the causes of workers in the world.

The trade unionist and Greek politician thanked the contribution of the Health professionals of this Caribbean country in the confrontation with Covid-19 in some 40 nations and territories of the world.

He also pointed out that in the face of a scenario of international crisis and intensified economic siege, Cuba’s advances in matters of health and defense of workers’ rights show the ideological, political and humanist superiority of socialism.

Cuba mainly celebrates virtually this May 1 due to the Covid-19 pandemic.

Etiquetas: Solidarity orgs ask from Europe to end the US blockade on Cuba