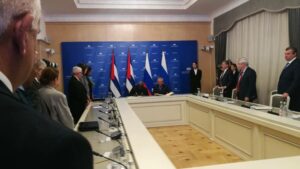 Moscow, Russia.- Meetings with the top leaders of both chambers of Parliament,on Wednesday, marked the first day of the official visit to Russia, of Esteban Lazo, President of the National Assembly of People’s Power (Cuba’s Parliament).

At the Council of the Federation , Lazo, who is also the President of the Council of State of the Republic of Cuba, held a brief meeting with Valentina Matvienko, Chairwoman of the Russian Upper House, after which she addressed the plenary session of Russian lawmakers.

Later, Lazo and his delegation laid a wreath at the Tomb of the Unknown Soldier at the foot of the Kremlin Walls.

The Cuban leader also held a meeting with the Chairman of the State Duma of Russia Vyacheslav Volodin.

Both interlocutors highlighted the good level of bilateral relations between the governments and parliaments of Cuba and Russia, which were proven during the recent visit of President Miguel Diaz-Canel to Moscow.

Volodin pointed out that Cuba, more than a strategic partner, is an example in the struggle it has waged for decades for its independence and sovereignty against a powerful neighbor that has spared no resources against the Caribbean nation.

Lazo thanked the Russian parliamentarians for their interest in strengthening relations between the two legislative bodies and stressed that strengthening those ties in the current conditions is essential for Russia and Cuba.

As a finishing point of the meeting, Lazo and Volodin signed the document for the establishment of the Collaboration Commission between the State Duma of the Russian Federation and the National Assembly of People’s Power of the Republic of Cuba.