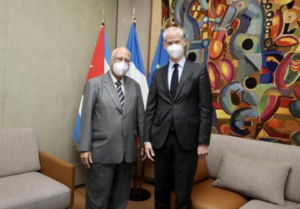 According to the Cuban Foreign Affairs Ministry, Cabrisas met with Franck Riester, Minister Delegate of the Ministry for Europe and Foreign Affairs, in charge of Foreign Trade and Attractiveness, and co-chair of the French-Cuban Economic and Commercial Commission, and with Emmanuel Moulin, General Director of the Treasury and President of the Club of Paris.

Riester reiterated France’s rejection of the economic, commercial, and financial blockade imposed by the United States against Cuba and assured his government’s support to the companies participating in different projects linked to Cuba’s economic and social development.

Likewise, the Ministry stated that these meetings were propitious to address the main issues of the bilateral agenda and ratify the common will to expand political, economic-commercial, investment, and cooperation ties.

The potentialities for the development and diversification of relations in areas of mutual interest were also raised during the meetings.