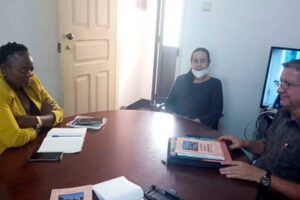 Luanda, Angola.- The director of the National Institute of Cultural Industries (INIC) in Angola, Domingas Monte, confirmed Wednesday the interest in strengthening ties with Cuba, for its potential in the formative and economic order.

At the INIC headquarters, the researcher, writer and university professor held on Wednesday a broad exchange on the subject with the counselor of the Caribbean legation in Luanda, Raul Gonzalez.

Both officials shared similar views on the importance of supporting artistic creation in its most diverse expressions as a direct productive force, capable of bringing material and spiritual welfare to their respective nations.

Gonzalez also gave an overview of the situation in Cuba under the effects of Covid-19 and the unilateral sanctions of the United States, whose government intensified the economic, financial and commercial blockade against the island, even in the midst of the pandemic.

In his opinion, the cultural activity is resuming its usual dynamism in different physical spaces, after the progress of the massive anti-Covid19 vaccination, which favors bilateral exchange.

Among the events in sight, she pointed out, stands out the next Havana International Book Fair, scheduled for February 2022 and whose will be held once again at the San Carlos de La Cabaña Historic Military Park, in the historic center of the city.

The INIC director valued the transcendence of attending a meeting of this nature, where creators from different parts of the world can meet.