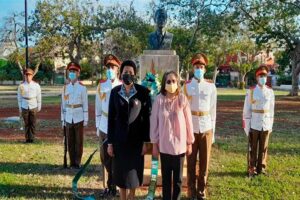 Havana, Cuba.- The South African Minister of Public Works and Infrastructure, Patricia de Lille, paid tribute on Wednesday to Nelson Mandela and Oliver Tambo at the African Heroes Park in this capital, on the occasion of that nation’s National Day.

De Lille laid a wreath to both leaders, outstanding fighters against the apartheid regime and founders of the African National Congress Youth League, on the occasion of South Africa’s National Day on Wednesday.

South Africa commemorates today the 28th anniversary of the first elections held in the country after the end of Apartheid.