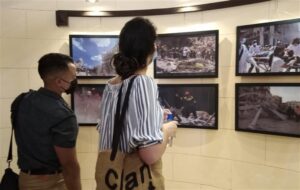 Havana, Cuba.- An exhibition with 35 images by Cuban photoreporters on the explosion at the Saratoga hotel and the subsequent rescue work was inaugurated here on Wednesday to honor the victims of that tragedy.

The exhibition, entitled Cuando los píxeles lloran (When pixels cry), from the national headquarters of the Union of Cuban Journalists (UPEC) presents a selection of over 300 snapshots received, Vice-President of that organization, Jorge Legañoa, said.

According to Legañoa, photos highlight the work of the people who worked day and night in the center of the capital’s Old Havana municipality until they found the last person reported missing.

The aim of the exhibition, which includes images by photographers from several media outlets, including the Latin American news agency Prensa Latina, is that the catastrophe that occurred on May 6 “does not remain diluted in time and is remembered,” Legañoa added.

According to Granma newspaper photoreporter Ricardo Lopez Hevia, the images propose a visual journey that turned out to be very complex because it is the reflection of a very hard week for the country.

After the disaster that shocked Cuba, photojournalism had to impose itself and left a very representative and professional sample of what happened, he said.

After the inauguration, a workshop was held at UPEC to analyze experiences on the coverage of the accident at the hotel, apparently the result of a gas leak.