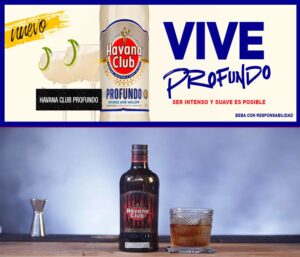 Havana, Cuba.- Revolution, innovation, creativity and audacity were perhaps the most mentioned words during the presentation of two new products of the mixed company Havana Club Internacional S.A., during the Cuba 2.0 Food Fair.

Havana Club Profundo and Havana Club Cuban Smoky are the brand’s most recent bets, and both are a blend of the best of the island’s tradition in the production of these rums, with the continuous search for scents, flavors and sensations.

Considered by First Master of Rum Juan Carlos González as a step up in the line of white rums, Profundo breaks new ground, is intense aromatically and smooth on the palate, and is made with a system of aged bases that is not common in white rums.

It contains almost no sugar, he added, and is excellent in cocktails with its straw-yellow color, brilliance, cleanliness and transparency.

Cuban Smoky is the rebellious and intense brother of Havana Club Añejo seven years old, Cuban Rum Master Asbel Morales said, who pointed out that it shares its aged bases, although it uses them in a different way.

Havana Club Internacional, founded in 1993 and associated with Corporación Cuba Ron S.A. and the French company Pernod Ricard, the brand’s international distributor, has two new trump cards with which it aspires to conquer young audiences.