A Guide, a Day

Carlos Manuel de Cespedes´s countrymen entrusted a young law student with the Demajagua Bell, to make it touch again against the demagoguery and corruption of politicians 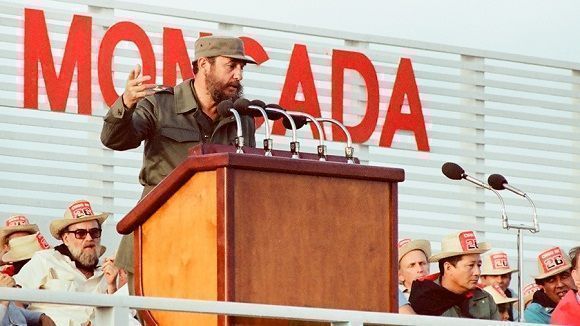 HAVANA, Cuba. – Carlos Manuel de Cespedes´s countrymen entrusted a young law student with the Demajagua Bell, to make it touch again against the demagoguery and corruption of politicians.

That young, already a lawyer, led the March of Torches and the armed assault that would not let the Apostle die in the year of his centennial.

Only Fidel Castro could be entrusted with the resumption of the struggle for the sanitation of the Cuban public life, because no one like him possessed the organizational capacity, powers of command, imperturbable optimism and visionary intelligence to change everything that should be changed in Cuba.

No one like him seemed chosen and predestined to found a nation worthy of itself and its past of fighting for independence. No other to shake the walls of the Moncada and the foundations of tyranny.

Always in 26, It Will Always Be Fidel

He was the one who captained the island’s ship in front of all the crises, from that one putting the nation on the brink of sinking in the waters of the Caribbean, as those that saved us from dangers before hurricanes and blockades.

He foresaw decades in advance the transformations in the geopolitical map of the world and conceived the strategies of our resistance.
He instructed us in the sense that Fatherland is humanity, that all rights are said when man is mentioned, and he warned us about the dangers that can destroy us. He reopened History´s doors to Cuba the early morning of July 26.