OXFAM urges the U.S. to remove blockade against Cuba

OXFAM urges the U.S. to remove blockade against Cuba 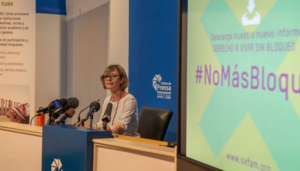 Havana, Cuba.- The international confederation of non-governmental organizations OXFAM on Tuesday urged U.S. members of Congress to eliminate the blockade imposed against Cuba for almost 60 years and the restrictions on economic, social, and political ties.

During a press conference, OXFAM’s Havana director, Elena Gentili, urged Joe Biden’s administration to normalize ties with the Caribbean nation and remove Cuba from the list of alleged sponsors of terrorism.

The representative also called for reopening diplomatic services and reversing the limitations on remittances and travel implemented by the Donald Trump administration (2017-2021).

“This will help Cuban families, the emerging non-state sector, and the country’s economy,” Gentili said.

OXFAM’s new report is entitled ‘Right to Live Without a Blockade. The impact of U.S. Sanctions on the Cuban Population and Women’s Lives”

According to the text, Washington’s policy affects more the possibilities of women to exercise and enjoy their rights and ignores their differentiated needs, opportunities and autonomy.

The text specifies that the blockade, reinforced with more than 240 measures during the Trump administration, deepens the economic crisis and hinders access to suppliers of medicines, technologies, food, and other necessities.

“Also, the unilateral provisions impact the daily lives of the most vulnerable groups, their families and livelihoods; they hinder the development of their own capacities and projects, in addition to limiting progress towards a more just and inclusive society,” it adds.

Etiquetas: OXFAM urges the U.S. to remove blockade against Cuba