Diaz-Canel: The United States has failed in its attempts to destroy Cuba

Diaz-Canel: The United States has failed in its attempts to destroy Cuba 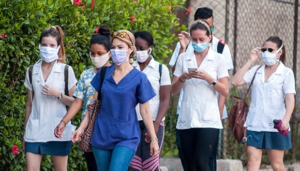 Havana city, Cuba.- Cuban President Miguel Diaz-Canel Bermudez said Friday that the United States has failed in its efforts to destroy Cuba despite having wasted billions of dollars to do so.

In a series of tweets, the Cuban president responded to statements made by his US counterpart Joe Biden, in which he said that Cuba was a failed state, that socialism was a failure, and that the island had a serious COVID problem.

In his replies, Diaz-Canel recalled that in the United States, due to the inefficiency of its government, 600 thousand people could not be saved from the disease.

“That country has a shameful record of wars and violence; brutal repression and murders of citizens by the police; racism and human rights violations.”

If President Joseph Biden had sincere humanitarian concern for the Cuban people, he could eliminate the 243 measures implemented by President Donald Trump, including the more than 50 cruelly imposed during the pandemic, as a first step towards the end of the blockade.

The Cuban leader stressed that Cuba is and will continue to be a country of peace.

” We will continue to make every effort to defend the tranquility of our streets. Amid these difficult days, I call for the unity of our people and all families, wherever they may be,” he added on the social network Twitter.

Diaz-Canel described the absurd narrative that Washington seeks to impose on Cuba as outrageous and offensive and rejected the existence of murdered or disappeared people on the island.

“The last Cuban dictatorship was overthrown in 1959. Hatred does not live here. We are a territory of peace “, he said.

Etiquetas: Diaz-Canel: The United States has failed in its attempts to destroy Cuba