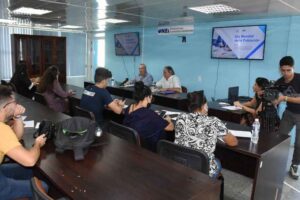 Havana city, Cuba.- Cuba at present has a Government Commission for Attention to Demographic Dynamics and Population Aging, which, among other objectives, pursues the adoption of plans and programs in order to stimulate fertility.

In a meeting with the press, the deputy chief of the National Office of Statistics and Information (ONEI), Juan Carlos Alfonso Fraga, specified that the current policy aims to approach, as far as possible, population replacement in an immediate perspective.

The commission also has the task of meeting the needs of the growing population aged 60 and over, as well as promoting their participation in economic, political and social tasks, encouraging to find work for people with disabilities and act against internal and external migration causing depopulation of rural areas.

The meeting at the national headquarters of ONEI was about the celebration on this day of World Population Day, a date to reflect on the importance of demographic issues and their impact on development plans.

According to the director of the Center for Population and Development Studies, Diego Enrique González Galbán, “as a trend, its population has begun to decrease and has reached a notable level of demographic aging, with 21.6 percent of the inhabitants aged 60 and over,” he pointed out.

In addition, the global fertility rate (average number of children per woman) was 1.45, when the indicator set for population replacement is 2.1.

According to the head of the ONEI, Juana María Pantoja, the island is a benchmark in population issues in the region, due to low mortality and high life expectancy (78.45 years).

According to estimates by the United Nations, there is a tendency for the population to increase in the world and in November of this year the number of eight billion inhabitants should be reached.