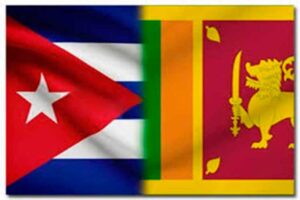 Colombo, Sri Lanka.- The Sri Lanka-Cuba Friendship Society on Tuesday condemned in a statement the economic, commercial and financial blockade against Cuba and US interference in Cuban affairs.

This solidarity association recalled in a statement, to which Prensa Latina had access, the victory of the Cuban people over the failed attempt to subvert order and peace in Cuba through acts of vandalism on July 11, 2021.

The document pointed out that Cuban people have enjoyed their successful Revolution for more than six decades and are marching towards development through social justice.

It noted that US President Joe Biden shows that he has no power, strength or ability to develop his own country and instead foolishly tries to destroy developing nations like Cuba.

It stressed that the US administration creates false news against Cuba and publishes it throughout the world to try to destroy the happiness of the Cuban people.

After the great Cuban Revolution, Fidel Castro and his team took on the responsibility of developing Cuba as one of the strongest independent countries in the world, which also assists other developing nations, particularly in the health sector.

The letter recalled Cuba’s support for Sri Lanka at the international and local levels and mentioned Cuban solidarity with other nations during the current Covid-19 pandemic.

The Sri Lanka-Cuba Friendship Society finally reaffirmed its protest against all blockades, embargoes, sanctions, violence and all kinds of US atrocities against Cuba.