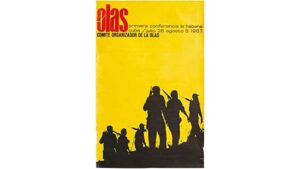 Havana city, Cuba.- The Latin America and the Caribbean panel, 55 years after the first Organization of Latin America Solidarity (OLAS) conference, takes place in Havana on Tuesday, in the presence of Cuban professors and researchers and in tribute to heroine Haydee Santamaria.

Coordinated by the Social Sciences section of the Economic Society of Friends of the Country, the conference pays tribute to the 100th anniversary of the birth of the guerrilla fighter and politician of the Caribbean nation, who was OLAS secretary general.

The aforementioned organization was founded in Cuba in August 1967, at the initiative of former Chilean President Salvador Allende. It was made up of several anti-imperialist movements in the region, with proposals and strategies similar to those promoted by the Cuban Revolution.

The first meeting of the group took place from July 31 to August 10 of that year, and determined among the objectives the liberation of the peoples of the area and the overcoming of the economic, social and cultural underdevelopment, and summarized the interventionist trajectory of the United States.