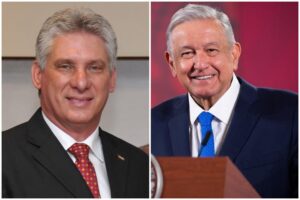 On his Twitter account, Diaz-Canel pointed out that the Mexican president announced his trip to Cuba in the coming weeks at his morning press conference on Friday.

You will be welcomed. It is always a pleasure to receive brothers from the Great Homeland. #Mexico and @lopezobrador have a privileged place in our affections. #SomosCuba, the Cuban head of State wrote on his Twitter account.

Along with his message, he posted a link to a Prensa Latina’s website on the Mexican president’s intention to visit Guatemala, El Salvador, Honduras and Belize as well, as part of a tour that will focus on migration.

In 2021, Cuba and Mexico celebrated 120 years of uninterrupted relations, characterized by a special bond ratified in September 2021 during Diaz-Canel’s visit to that neighboring nation to participate in the commemorative events on the 211th anniversary of the Cry of Dolores and the bicentennial of its Independence.

On that occasion, the Cuban leader tweeted , “On the day of the #GritoDeDolores, the national holiday of #Mexico, it is an honor to reach the endearing Aztec land, to which #Cuba owes, loves and respects so much.”