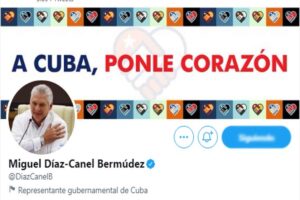 ‘The U.S. embassy in #Cuba insists on its sad and shameful role of subverting the internal order in our country,’ the president wrote on his Twitter social network account.

The head of state said that ‘we will not stand idly by in the face of such behavior,’ and as in ‘…so many years of struggle, we have the firm determination to confront and denounce it.

In his message, Diaz-Canel shared the publication of Cuban Foreign Minister Bruno Rodriguez, who denounced the U.S. diplomatic headquarters in his country, for the ‘growing role’ in the efforts of political subversion against Cuba.

‘It is provocative behavior and in violation of the Vienna Convention. We have the determination to confront the subversive and aggressive work of the Embassy,’ questioned the Foreign Minister.

Yesterday, the president closed the II Plenary Session of the Central Committee of the Communist Party of Cuba with a speech in which he denounced the economic, commercial and financial blockade that the United States imposes on his country and that ‘is not comparable in the planet’.

He also condemned the actions of the U.S. embassy, whose officials hold frequent meetings with leaders of the counterrevolution, and issue offensive pronouncements on their social networks about the country’s internal affairs.

‘They intend to identify and promote leaders, especially young people, to prepare them abroad in order to use them to promote their anti-socialist, pro-capitalist and neoliberal ideas’, criticized the head of state.