The Cuban President, Miguel Diaz-Canel Bermudez, arrived at El Carmen Park in the city of Santa Clara to celebrate the 330th year of founding of the city. 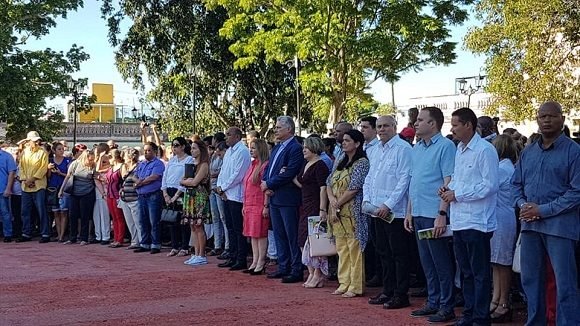 SANTA CLARA, Cuba. – The Cuban President, Miguel Diaz-Canel Bermudez, arrived at El Carmen Park in the city of Santa Clara to celebrate the 330th year of founding of the city.

The people welcomed their President in that square, the founding site of the capital, where a gala titled Encounter with History was held, as well as a tribute to a benefactor Marta Abreu.

As part of the activities for Santa Clara’s 330th birthday this July 15, the solemn session of the Municipal Assembly of People’s Power will also take place, where they will recognize personalities who have contributed to the development of the city.

The program planned for the occasion will conclude tonight with the closing of the Exhuberarte Fashion Festival, and a concert by Leoni Torres at the Sandino Cultural Project.

Cuban President Miguel Diaz-Canel, accompanied by hundreds of people, took a walking tour of emblematic sites of the city of Santa Clara, which celebrates its 330th anniversary this Monday.

Díaz-Canel, surrounded by people, walked from the founding site of the city, the Church of Carmen, to Leoncio Vidal Park.

During the journey, the Cuban President visited the pedestrian boulevard, the headquarters of UNEAC, the Central Hotel and enjoyed the performance of troubadours, poets and other artists. He also paid tribute to Marta Abreu, benefactor of Santa Clara, before her statue in the center of the city.

Santa Clara is internationally known as the City of Che, as a tribute to Commander Ernesto Guevara, who led the fight for the liberation of the city during the dictatorship of Fulgencio Batista.