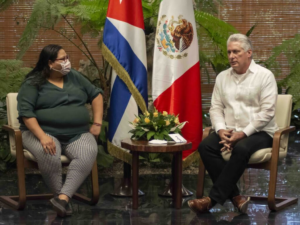 During the meeting on Wednesday, the two leaders held a friendly dialogue and exchanged on the current international situation and the reality of Latin America and both sister nations.

Díaz-Canel stressed the importance of the upcoming visit to the island by Mexican President Andrés Manuel López Obrador and thanked the expressions of solidarity with the Cuban people.

For her part, Citlalli, who is on a working visit to Cuba at the invitation of the Cuban Communist Party, highlighted the results of the work of Cuban health professionals and scientists in the fight against the Covid-19 pandemic.

She also referred to Cuba’s efforts in solving the problems of its people and the economic and social development of the country, despite the blockade imposed by the US government for more than 60 years.

Also participating for Morena were the federal deputies Jorge Toledo and Otoniel García; the person in charge of International Affairs, Verónica García, and Carlos Paizani, academic coordinator of the Institute of Political Formation.

Also present were Roberto Morales Ojeda, member of the Political Bureau and Secretary of Organization of the Central Committee of the PCC, Josefina Vidal Ferreiro, Vice Minister of Foreign Affairs, and Ángel Arzuaga Reyes, Vice Chief and Coordinator of the Department of International Relations of the PCC.