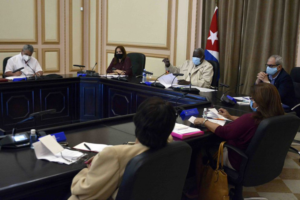 Havana, Cuba.- The Council of State of the Republic of Cuba approved on Monday four new decree-laws and two agreements.

The President of the National Assembly of Peoples Power and head of the Council of State, Esteban Lazo Hernandez chaired the session. President Miguel Diaz-Canel Bermudez participated in a video conference, informed the Cuban Parliament website.

of July 1, 2021, that currency will no longer be accepted in stores and establishments previously authorized to receive them.

Aspects related to the functioning of the Ministry of Culture, the Ministry of the Interior, the term of the current Municipal Assemblies of People Power were also c covered by the approved laws.