The world to stage caravans against US blockade against Cuba

The world to stage caravans against US blockade against Cuba 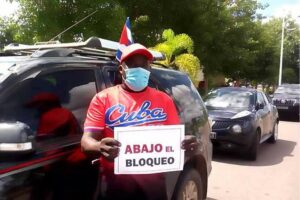 Havana, Cuba.- Friends from different continents and solidarity movements will lead on Saturday a new world caravan against the US economic, commercial and financial blockade against Cuba.

According to the Cuban Institute of Friendship with the Peoples (ICAP), the initiative will include emigrants and associations of Cubans living in different regions, parliamentarians, scholars, artists, as well as graduates from Cuba.

Parks, streets and other public places will provide space for activists, who in caravans of cars, bicycles and motorcycles, walks, sit-ins in front of US embassies, and through social networks, will share images, statements and videos in rejection of the policy.

In the United States, demonstrators will participate in over 20 cities, such as Miami, New York, Washington, Detroit, Chicago, Los Angeles, Sacramento, Oakland, San Diego, San Francisco, Tampa, Las Vegas, Minneapolis, Seattle and Indianapolis; while in Canada supporters will be present in Vancouver, Montreal, Winnipeg and other regions.

The US blockade will be also denounced in the Latin American and Caribbean region, from Mexico, El Salvador, Dominican Republic, Belize, Panama, Ecuador, Uruguay and Argentina.

In Europe, mobilizations have been convened in Brussels, Belgium, on the esplanade of the Atomium; in the squares of Cibeles (in Madrid) and Catalonia (Barcelona), both in Spain; walks in London, Birmingham, Manchester and Glasgow, and a bike ride from the Elephant and Castle crossroads to Lambeth Bridge, in the United Kingdom.

Etiquetas: The world to stage caravans against US blockade against Cuba