Exclusions in Summit of the Americas rejected in Costa Rica

Exclusions in Summit of the Americas rejected in Costa Rica 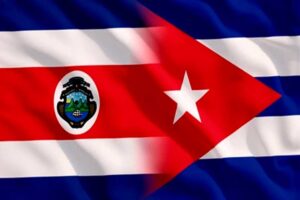 San Jose, Costa Rica.- Costa Rican political analyst Oscar Barrantes on Monday rejected the exclusion of Cuba, Nicaragua and Venezuela from the 9th Summit of the Americas and affirmed that this meeting of hegemonism is in the abyss.

“The Summit of the Americas was a strategic trick of the hegemonic policy of the ancient Anglo-Saxon colonialism and contemporary recolonizing imperialism,” said Barrantes, analyst of the Costa Rican Popular Center for Social Studies (CPCES).

In an article posted on social media, he considers that the imperialism, in times of total bankruptcy, is increasingly isolating itself and describes the calculations of the US Department of State as erroneous, after forcing a Summit under its auspices in these times.

“They are trying to hold a continental meeting to legitimize the global war with the puppets of Nazi-fascism, pretending to lead the world to the catastrophe of the total dictatorship of unipolarism, governed by the aristocracies of ultra-capital in their greed to perpetually enslave humanity,” Barrantes said.

He added that with the imperial arrogance that characterizes them, they decided in the White House what countries and states were allowed to participate.

They say that Cuba, Nicaragua and Venezuela are forbidden, the CPCES analyst stated and denounced that they deny those nations their moral authority as constitutional states.

He pointed out that “states and governments of the continent raise the banner of solidarity and equal sovereignty as a principle of the international relations, and show solidarity with the repressed countries. They decide not to attend the so-called Summit of the Americas.”

Barrantes emphasized that the humble and conscious peoples of the continent express their categorical support for the constitutional and sovereign Governments of Cuba, Nicaragua and Venezuela in the face of this recycled aggression and siege, plotted from the insane dictatorship in Washington.

At the same time, they reiterate their total repudiation to the criminal blockade and the multidimensional war against socialist Cuba, the peoples of the continent condemn the genocidal aggression perpetrated by the United States with the intention of crushing the free peoples of Cuba, Nicaragua, Bolivia and Venezuela, he said.

“The Summit of the Americas that will be imposed will be the summit of the peoples with the guidance of the ideals by Simon Bolivar, Jose Marti, Augusto Cesar Sandino, Che, Fidel Castro Ruz and Hugo Rafael Chavez Frias,” Barrantes concluded.

Etiquetas: Exclusions in Summit of the Americas rejected in Costa Rica