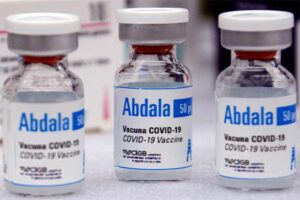 After giving a report on the situation of the pandemic, Alcocer replied to a question from a journalist that the Federal Commission for Protection against Sanitary Risks (COFEPRIS) accepted it as it always does with new drugs.

He said that COFEPRIS has evolved a lot in its scientific condition, which makes it another type of organism and incorporates or recognizes only well-endorsed drugs, even by other countries that have that capacity.

In the case of Abdala, he said, the vaccine completely passed all quality tests, and Mexico, like other countries, certified and approved it.

The Minister added that now they are waiting to see how Cuba is going to handle the way of sharing it and how “we are part of the perspectives of that distribution process, just like they are with the Mexican vaccine Patria, because we can contribute with other countries, also sharing the that we have to import and integrate ourselves into those efforts.”

He expressed his opinion that one of the perspectives is its use of reinforcement, although he did not give details about it.

For his part, President Lopez Obrador was caustic when referring to an alleged great controversy on social networks when the news of COFEPRIS and the Cuban vaccine came to light, up to the point of saying that it was made with muriatic acid.