Artists in Cuba will honor women with a pantomime show

Artists in Cuba will honor women with a pantomime show 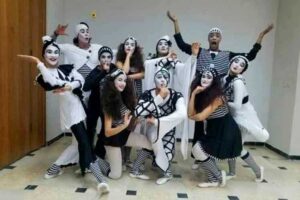 Havana, Cuba.- The Body Fusion Theater Company will honor women with a show created from the art of mime to present in the Cobarrubias room of the National Theater of Cuba, they reported today in a press release.

The show Gestos de mujer will arrive on the stage of the cultural center on July 8, 9 and 10 as a result of the selection of short works from the repertoire of the group that will celebrate its 30th anniversary in 2023.

The staging, which ponders the role of artists in the development of this discipline, is conceived as “a gestural magazine that will address a different, narrative and conceptual story to invite reflection and enjoyment by viewers.”

The King of the chicken coop, Mariposita, I don’t want to know about men, Orishas, ??Genesis and Addiction are some of the titles selected by the group that was in charge of the IX edition of the International Pantomime Event last month.

The event brought together 12 artists from Brazil, Ecuador, France, Argentina and Colombia in the Tito Junco room and the Café Theater of the Bertolt Brech Cultural Complex in Cuba to exhibit works and exchange about the specialty.

Summoned by the director of the company and president of the organizing committee, Maritza Acosta, the French mime Turjman Benoit and the Ecuadorian Luis Augusto Cáceres Carrasco arrived at the Wonder City for the first time, presenting two books.

During these days, the participants also paid tribute to the woman and her work within the guild, especially to the late playwright Elsa Hernández Costales, recognized as a great academic of the Caribbean nation.

Etiquetas: Artists in Cuba will honor women with a pantomime show