Regatta against the U.S. blockade to take place on May 30

Regatta against the U.S. blockade to take place on May 30 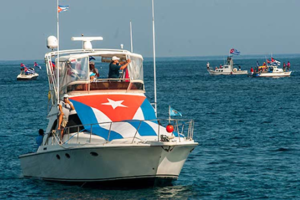 Havana, Cuba.- Young Cubans have called for a regatta against the U.S. blockade in the Bay of Jagua, central Cuba, on May 30, according to social media posts.

The initiative joins the call for a world caravan of solidarity with the island that will also occur this weekend.

On the last Sunday of April, a similar initiative was also held on the seafront of the Cuban capital as part of the international project that unites several activists in favor of scrapping the U.S. hostile policy against Cuba.

This coming Sunday, May 30, there will be another world caravan for the Cuban family and against the U.S. siege, according to the Bridges of Love project led by Cuban-American professor Carlos Lazo.

Émigrés and associations of Cubans living in different regions of the world, parliamentarians, academics, artists, and graduates in Cuba, will attend public places to denounce U.S. hostility.

Last March, during the first activity of this type at the international level, there were expressions of solidarity with the Caribbean island in a hundred cities in more than 60 countries.

In addition to these initiatives, every year, the international community shows its rejection of U.S. policies against Cuba during the United Nations General Assembly, where the overwhelming majority of its members votes in favor of a resolution requesting the end of the blockade.

Etiquetas: Regatta against the U.S. blockade to take place on May 30