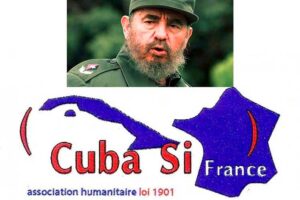 Paris, France.- The Cuba Si France solidarity association on Thursday assured that the historic leader of the Revolution on the island, Fidel Castro, is more present than ever with his legacy and example, after five years of his death.

“Today Fidel is more alive than ever in the hearts of the Cuban people, the battle of ideas and the struggles of the peoples for their emancipation,” Cuba Si France stressed in a statement to which Prensa Latina had access.

The association, with three decades of support to the Caribbean nation and its Revolution, described the statesman’s work as monumental and considered him an example of resistance to US imperialism.

Fidel Castro (1926-2016) is a giant of history, a visionary who made the conquests of the Cuban people possible with his ideas, humanism, determination and incredible charisma, it stated.

The solidarity association praised the leader’s ability to provide to the new generations the strength of his convictions, humanist values and international solidarity.

Cuba Si France affirmed that Fidel Castro is a source of inspiration and ratified its support and solidarity with the Caribbean nation.