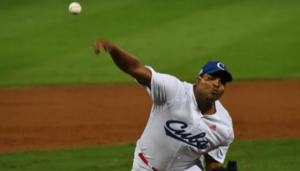 Havana, Cuba.- Cuba’s baseball team will face Canada on Tuesday in a crucial game, after a close loss to Venezuela in its first outing in the Pre-Olympic of the Americas, held in the U.S. state of Florida.

Right-hander Carlos Juan Viera will be in charge of opening the important game against Canada, a team with a left-handed lineup and winner of several victories over Cuba in first level events.

Cuban team manager Armando Ferrer announced some changes in the lineup against Canada, among them the entry of Lisvan Correa, author of a home run as a starter on Monday and the Most Valuable Player (MVP) of the recent Cuban season.

Although they connected 10 hits, including home runs by Erisbel Arruebarrena and Lisván Correa, the Cubans fell by the minimum and lost by the score of 6 to 5 against Venezuela, in a disputed game played in West Palm Beach.

Arruebarrena (4-2, with home run and 2 RBI) and catcher Yosvany Alarcón (4-2) were the only two hitters for Armando Ferrer’s team, although Correa also hit a 2-run home run in his only opportunity to bat as a pinch hitter.

Carlos Pérez was the best offensive player for the Vinotinto, hitting 4-3, with a home run and 4 RBIs.

The victory went to Jonathan Díaz, the fourth pitcher used by the Venezuelan management, who in 1.2 innings did not allow any runners to the Cuban battery. It was lost by Lázaro Blanco, first of the 5 pitchers used by Armando Ferrer.

Regarding Alfredo Despaigne, who had to leave the game due to an injury, doctor Francisco Montesinos said that the Japanese baseball star hurt a pectoral muscle and almost certainly will not be able to play on Tuesday.

In the remaining matches of the first day of the pre-Olympic, the Dominican Republic, Canada and the United States were victorious.

The Dominican Republic beat Puerto Rico (5-2), with a great performance by left-hander Raúl Valdés, who worked seven innings and allowed only two runs and three singles and batting by Gustavo Núñez (3-3, a triple) and Luis Liberaro (2-1, a home run).

On Tuesday, the second day, Cuba-Canada and Venezuela-Colombia will play against each other in Group B, and Nicaragua-Puerto Rico and the Dominican Republic-United States in Group A.

The pre-Olympic awards a ticket to the Tokyo Games and the possibility for the second and third place finishers to go to a world playoff, scheduled for Puebla, Mexico from June 22nd to the 26th.

Etiquetas: Cuba vs Canada in do-or-die game in the pre-Olympic baseball tournament