Legislators in Cuba prepare laws on courts and procedural reform

Legislators in Cuba prepare laws on courts and procedural reform 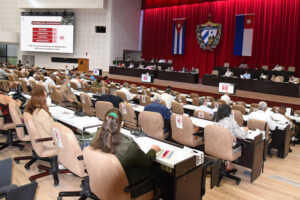 Havana, Cuba.- Cuban legislators are analyzing as of Monday the bills presented by the People’s Supreme Court, prior to the first session of Parliament this year, marked by the Covid-19 pandemic.

In tune with the progress of the vaccination process on the island and the decline in Covid-19 contagions, the National Assembly of People’s Power plans to hold its Seventh Ordinary Session in its Ninth Legislature, starting on October 27.

Havana legislators and those elected in other provinces but are living here will attend in person at the Conference Center in this capital.

Most of legislators will be participating from their territories through videoconferences.

In the days prior to the Ordinary Period of Sessions, lawmakers will debate the bills on Courts of Justice, Administrative Process, Code of Processes and Criminal Process, as part of a profound procedural reform, according to Parliament’s Secretary Homero Acosta.

The agenda includes the analysis of the documents approved by the 8th Congress of the Communist Party of Cuba, held in April, which defined the economic and social model of socialist development.

The Cuban Parliament expects to recognize the contribution of science and its scientists in the fight against Covid-19 on the island, with its own vaccines to combat the disease.