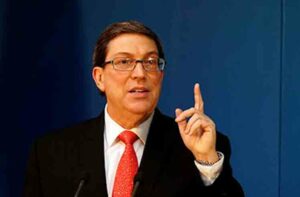 Havana, Cuba.- Cuban Foreign Minister Bruno Rodríguez on Thursday described attacks on those who defend the re-establishment of US-Cuba relations as unacceptable.

On Twitter, the Cuban foreign minister posted that ‘harassment, racist and homophobic foul language at US citizens who support the ¨Let Cuba Live¨ request should embarrass alleged human rights defenders in the United States and Europe’.

Cuba is under constant siege from abroad, from a hatred campaign financed and orchestrated from its neighboring country that seeks to interfere in Cuba´s internal affairs, under the guise of an alleged ‘humanitarian intervention’.

Puentes de Amor promoter Carlos Lazo has often condemned the attacks on participants of a protest walk that started from Miami to Washington D.C.

Over 400 artists, politicians, intellectuals and activists around the world have recently sent a letter to President Biden asking for the end of the US blockade and the unilateral coercive sanctions on Cuba.